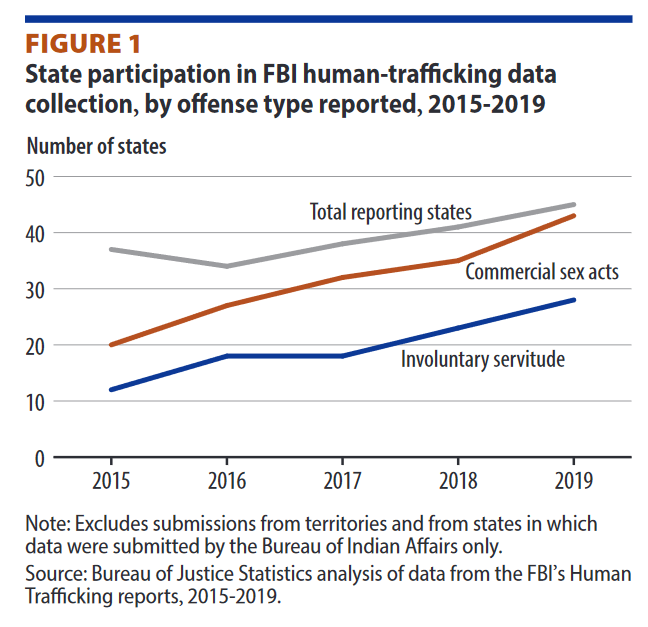 The U.S. Department of Justice’s Bureau of Justice Statistics (BJS) recently released the annual “Human Trafficking Data Collection Activities” report highlighting up and coming data collection initiatives that have the potential to give a more accurate snapshot of what human trafficking looks like in the United States.

Currently the FBI uses the Uniform Crime Reporting Human Trafficking (UCR-HT). Law enforcement agencies use its record management system to document human trafficking incidents that then get reported to the state, then the state sends that information to the FBI’s UCR-HT.

Current data from the UCR-HT indicates and increase in participation in data collection over the last five years. From 2015 to 2019, the number of arrests for involuntary servitude increased from 66 across the country to 146. Arrests for commercial sex acts fluctuated over five years, but in 2019 was 562 arrests across the country. 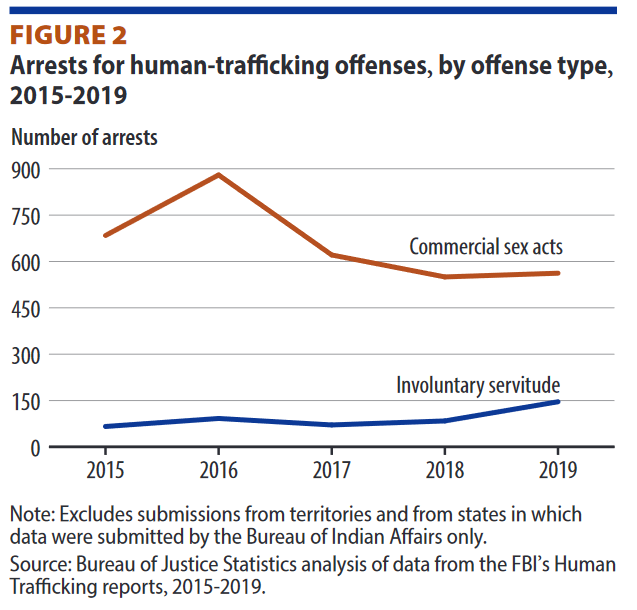 The NCS-X is a collaboration between BJS and the FBI to increase the number of law enforcement agencies reporting detailed crime data to the National Incident Based Reporting System (NIBRS).

The NIBRS is a new system that shifts from a summary-based reporting system for criminal offenses to an incident-based system, which offers law enforcement to give more detailed information to the FBI that has the potential to delineate various human trafficking arrests and incidents.

The NCS-X Initiative is enrolling 400 scientifically selected agencies using NIBRS. Once that data is collected and then combined with the 7,000 agencies already using NIBRS, the United States will have the capacity to make accurate estimates on crimes.

One of the most exciting data collection points being pursued by BJS is the 2019 Census of Tribal Law Enforcement Agencies (CTLEA). It is the first BJS data collection initiative that is focusing exclusively on tribal law enforcement agencies.

This is the first of its kind, according to BJS.

The response rate among tribal law enforcement agencies was 92 percent and 100 percent among state and federal police programs, meaning the data has the capacity to be as encompassing as possible.

The CTLEA captures information about whether the agency has jurisdiction over criminal cases; staffing and training and sources of funding; officer workload and number of arrests; whether the agency has access to and participates in regional and national justice database systems (includes domestic violence protection order registries); and whether the agency is responsible for monitoring sex offenders on tribal lands.

The agencies are also asked whether they made arrests for sex trafficking and labor trafficking in the previous year.

Data from the CTLEA has not been released yet, but it will cover 2019.

The National Survey of Victim Service Providers (NSVSP) was conducted in 2019, and another point of data collection that was one of kind.

They also provided data on how many sex trafficking and labor trafficking victims are referred for services from police, hospitals, etc.; what services those particular victims needed; the cost of those services; and the source that funded the service delivery.

There were five VSPs that were classified in this data collection initiative were government-based, nonprofit or faith-based; hospital, medical or emergency; campus or educational; and tribal.

The data on this initiative has not been released yet.

Only 31 offices had access to criminal analysts; 37 had access to computer forensic experts and 44 participated in at least one federal, regional or state task force combatting human trafficking.