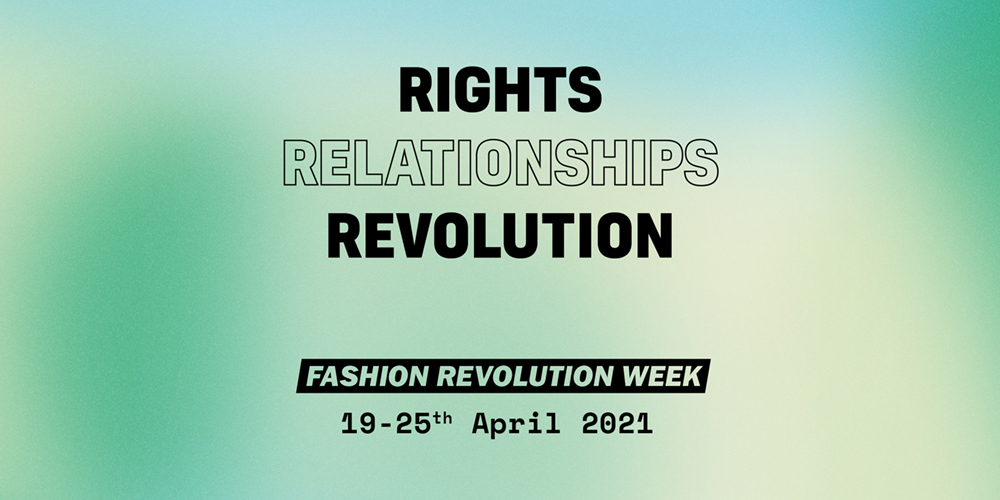 Fashion Revolution Week is a global movement that campaigns for a clean, safe, fair, transparent and accountable fashion industry. This campaign is done through research, education, collaboration, mobilization and advocacy.

The investigation into the collapse and the tragic loss of life revealed exploitative and dangerous working conditions. Fashion Revolution is designed to ignite systemic change in the garment industry.

The Rana Plaza Factory collapse in Dhaka, Bangladesh, is considered the worst garment industry accident of all time, killing 1,138 and injuring more than 2,500 people.

How could this happen?

First of all, the top four floors were constructed without permits.

The industrial factories were operating in the upper floors with the lower floors containing banks and retail shops. Those retail store and banks closed the day of the collapse due to fear for structural integrity.

The industrial workers saw cracks in the building the day before and pleaded with management to not work the day of the collapse, but the management pushed them to go to work nonetheless.

They were rightfully scared because around 9 a.m. that day the floors of the building began to fall through.
The harrowing stories of death and survival were transmitted across the world. 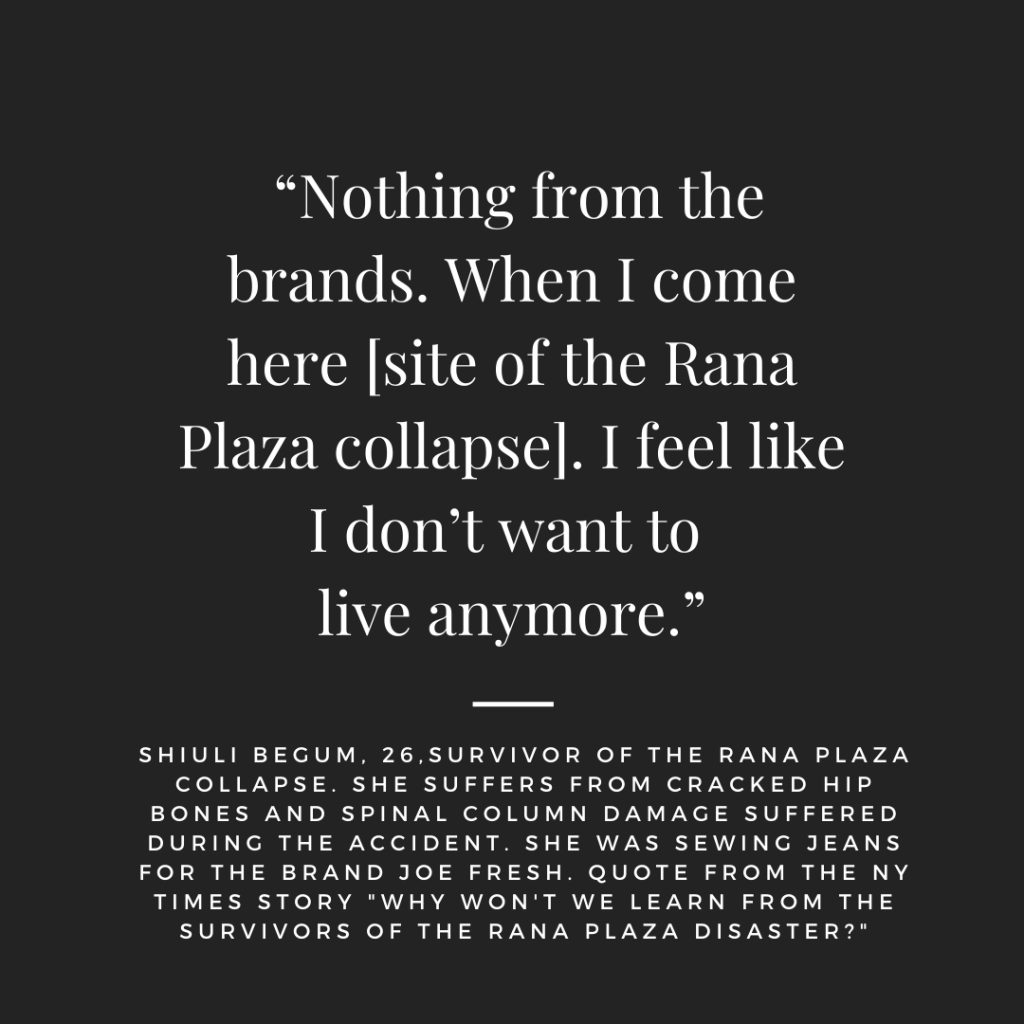 So, who is to blame?

We can look at the direct cause of such extensive human loss when we look at the Rana Plaza, and that would be the owner.

A Bangladesh court found the owner of the factory, Sohel Rana, guilty of corruption in 2017. Reports indicate he was sentenced to three years in prison. He is awaiting trial for murder. He along with 37 others, including government officials, could receive the death penalty if they are found guilty of murder over the complex’s collapse.

But while these individual behaviors are the direct cause of the Rana Plaza’s human loss, let’s take a deeper dive into the exploitative garment industry that western companies fuel.

Western Retailers Demand Cheap Clothes and Workers Suffer for It

“Each of these brands was a complicit participant in the creation of an environment that ultimately led to the deaths and maiming of thousands of individuals.” — from Clean Clothes Campaign

As fast fashion brands and chain retail outlets in the U.S., Canada and Europe demand clothing made quickly and cheaply, the human toll has become untenable.

From sweatshops to dangerous working conditions, the profits over people mentality has permeated the garment and clothing industry.

According to Clean Clothes Campaign, while the brands that were culpable in the Rana Plaza collapse have made efforts to ensure Bangladeshi workers are working in safer environments, there is still much more work to do — especially around the world.

Human Rights Watch says, “In the US $2.4 trillion garment industry, which employs millions of workers worldwide, labor rights abuses are rife. In countries around the world, factory owners and managers often fire pregnant workers or deny maternity leave; retaliate against workers who join or form unions; force workers to do overtime work or risk losing their job; and turn a blind eye when male managers or workers sexually harass female workers.” 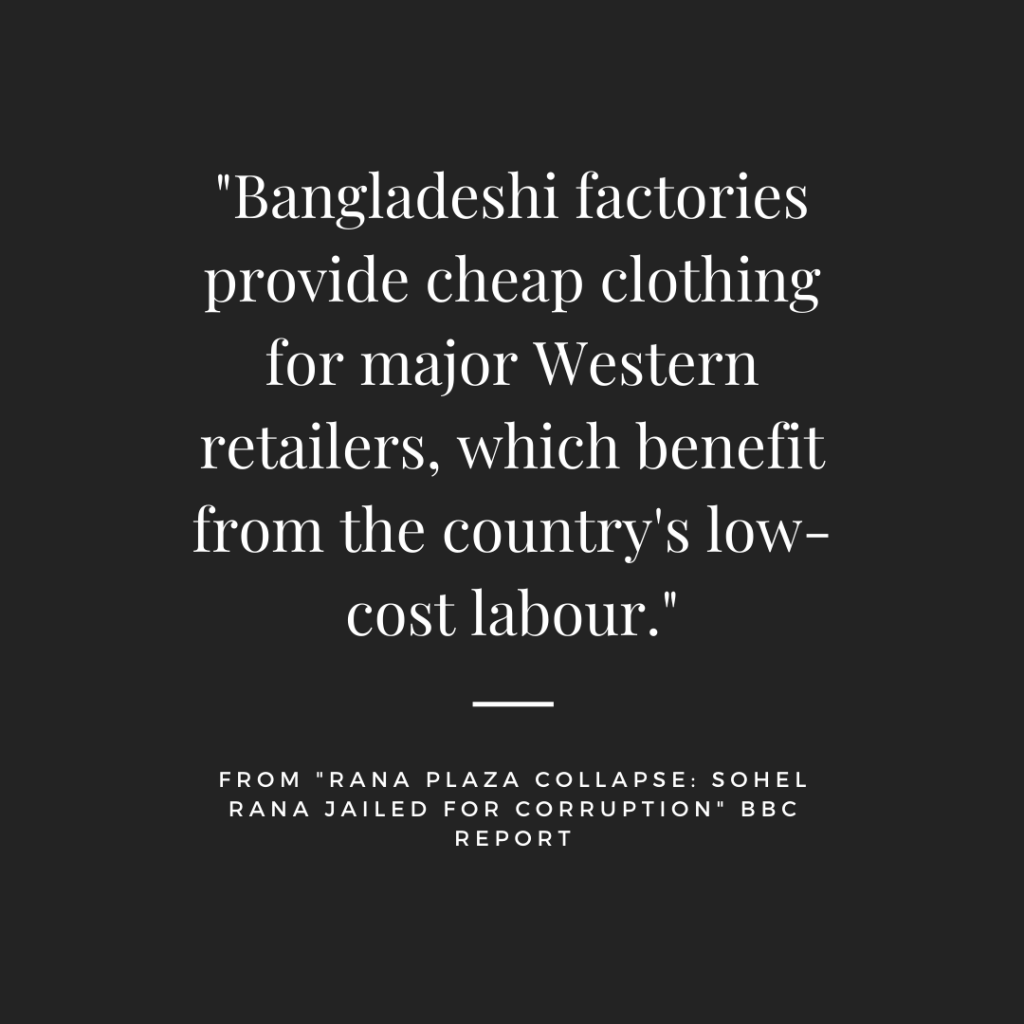 From child labor in cotton fields to forced labor in garment factories to workers toiling in unsafe conditions and making below a living wage, how we spend our money is important. If you don’t like the idea of exploitation of women, men and children; if you worry about the people who make your clothes; if you are distressed about the cost to human life; then stop supporting fast fashion.

The time of exploitation is over. Join the movement to end labor trafficking, prevent sex trafficking and end the victimization of millions of people around the world and support transparency and support fair trade.

Consumers have all the power. Companies will recognize when the money dries up based on consumer worry over exploitation and human rights abuses, and they will become more transparent and work harder for clean supply chains that aren’t harmful.

Join the Fashion Revolution. Here is how:
Get Involved Guide: Citizens

Sweatshops are in the U.S.

The Garment Workers Center has a vision that Los Angeles garment workers will transform the fashion industry to eliminate sweatshop labor. Workers lead the fight for safe and dignified workplaces with fair wages. They strive to build power from the bottom up for social and economic justice.

EXCERPT FROM STORY:
“A knee-length Forever 21 dress made in one of the Los Angeles factories investigated by the government came with a price tag of $24.90. But it would have cost $30.43 to make that dress with workers earning the $7.25 federal minimum wage and even more to pay the $12 Los Angeles minimum, according to previously unpublished investigative results from the Labor Department.

Forever 21 would have had to pay 50% more in order for sewing contractors to pay workers the federal minimum, the investigation found.

The Department of Labor discovered labor violations at 85% of the factories it visited during that four-month period and ordered the suppliers to pay $1.3 million in back wages, lost overtime and damages — but it couldn’t touch the brands.

“This whole problem devolves from the retailer,” said David Weil, the former head of the Labor Department’s Wage and Hour Division, which led that investigation. “They force the production costs to as low as they want because of their power in the supply chain, with the result of ultimately the workers bearing the whole cost and risk of the system.”

How to shop fair trade garments

Fair Trade garments can be hard to find sometimes, but they are available. From popular brands like Patagonia and Athleta and J. Crew to lesser known brands such as Obey and Outerknown, fair trade clothing is made out of quality, ethical materials. They are products that put people over profits and are forces for good and fashion. CLICK FOR SHOPPING GUIDE.