Impact of COVID-19 May Lead to More People Being Trafficked 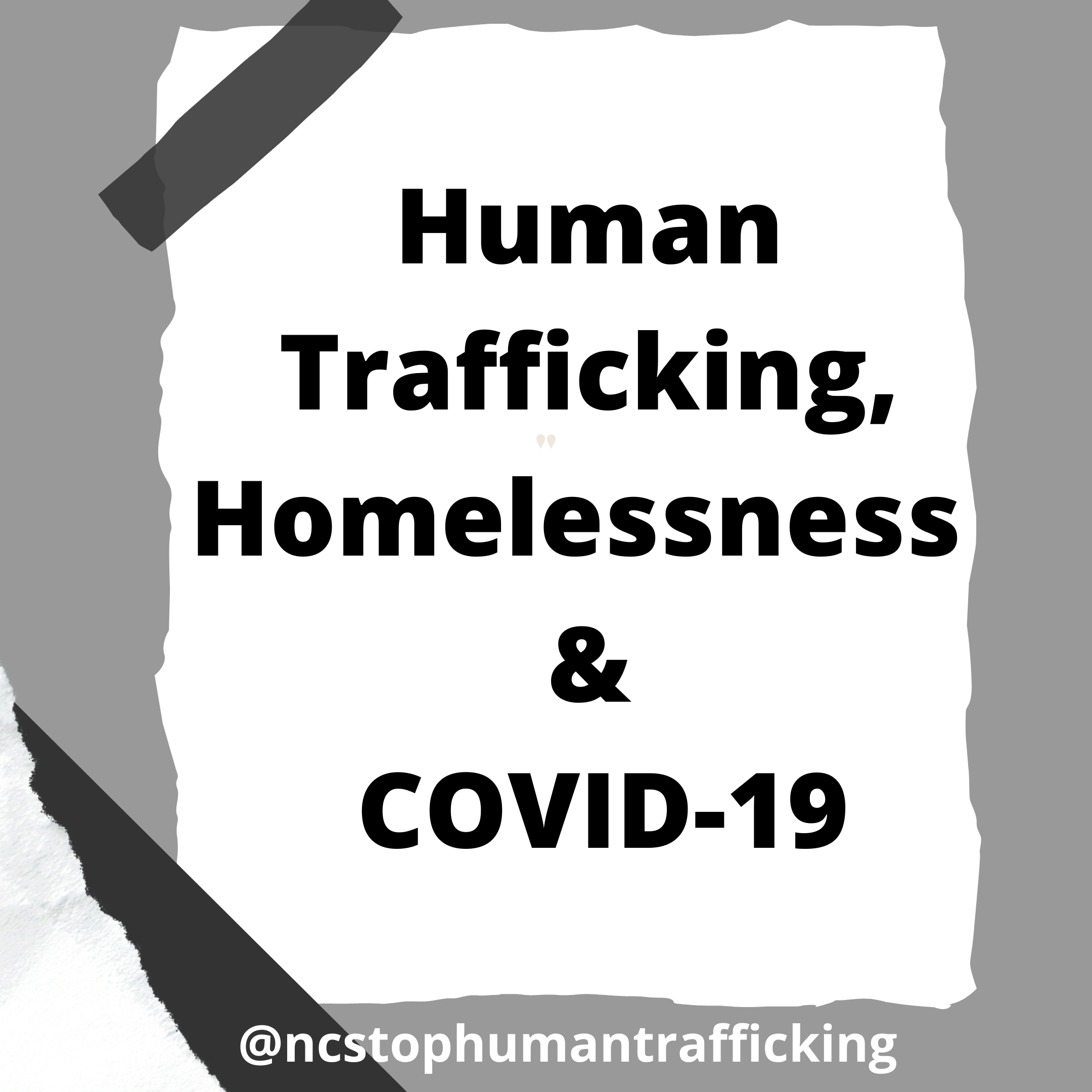 As the economic impact of COVID-19 begins to settle in across the country, it is reasonable to expect more people to become homeless.

Earlier this year, the pandemic began to strain homeless shelters in areas across the state, resulting in visible tent cities in some areas.

The Center for Disease Control has implemented a national moratorium on evictions until Dec. 31, 2020, but Jim Barrett, executive director of Pisgah Legal Services told the Asheville Citizen-Times earlier this week that without federal aid support that CDC order is “kicking the can down the road.”

It needs to be said, that the link between homelessness and
human trafficking is inextricable. Traffickers recruit their victims from
homeless shelters or off of the streets in which they may be living.

The likelihood that a young person who is homeless will get
trafficked is exponentially higher than that of a young person with a secure
living arrangement. To survive, these vulnerable young people will sell sex,
take a shady job opportunity or affiliate themselves with organized crime to
get their basic needs met.

Bigelsen also highlighted the devastation of a job loss by a
survivor by recounting this statement a survivor in New York made, “When I lost
this job, I thought about going back to the life for the first time in a very
long time while. I didn’t know how else I would pay the rent.”

Bigelsen said advocates are seeing an “explosion” in street prostitution since the pandemic hit, where it was declining and moving to online platforms.

“Since Covid, we have seen an explosion in young black and brown bodies being sold up and down International Boulevard (Oakland, California). These fools wearing masks keep driving up to purchase young girls.”

Brian Bob, director of community involvement/outreach at Covenant House in California, as quoted in “No Shelter in Place: Sexploitation of homeless youth and their increased vulnerabilities during the COVID-19 crisis “

It is extremely important to note, the impacts of racism
that are naked during this pandemic (black and brown people have disproportionately
been affected based on infection rates and mortality), is also going to be
stark when we look at the damage it has wrought on the nation’s BIPOC
population when we look at homelessness and poverty.

If populations of people were already marginalized, they will become further marginalized and oppressed on the socioeconomic ladder when the economy sinks further into recession and opportunities begin to evaporate.

The exact homeless rate has not been nailed down currently, but it would appear it has likely gone up at present or will increase dramatically once the moratorium is lifted.

In the Modern Slavery Research Project at Loyola University study “Labor and Sex Trafficking Among Homeless Youth,” economic opportunities, or lack thereof, were highlighted as a risk factor for trafficking among the homeless youth.

According to the Loyola study, “Homeless youth are
vulnerable to both sex and labor trafficking because they tend to experience a
higher rate of the primary risk factors to trafficking: poverty, unemployment,
a history of sexual abuse and a history of mental health issues.”

Other victims felt that that they had to turn to sex because
they could not find any legitimate work, according to the study, with 84 percent
reporting turning to the sex trade without a third-party controller – what is
commonly known as survival sex.

In an older study “Homelessness, Survival Sex and Human Trafficking: As Experienced by the Youth of Covenant House New York” (2013), “Youth most frequently reported exchanging sexual acts for a shelter or a place to sleep (48%).”

While we are looking at the increase in homelessness due to
COVID-19, we would be remiss in not unpacking homelessness among youth without
the further burden of a pandemic.

In North Carolina, homelessness looks like 28,903 public school students as a total in 2018. This number includes 3,181 unaccompanied homeless students; 1,088 experiencing no nighttime shelter; 2,466 who are sleeping in shelters; 4,252 who are living in motels/hotels; 21,097 who are couch surfing or living with friends and family. These numbers are according to the United States Interagency Council on Homelessness.

It is important to note, these numbers are only of youth who
are enrolled in the public school system, and does not include runaway youth
and abandoned youth.

According to the “Labor and Sex Trafficking Among Homeless Youth” study, there are certain causal points that resulted in youth homelessness. They are economic, housing, work, gender, and sexuality.

The study says these youth were “desperate for work and that
people took advantage of their need.” In fact, 91 percent of respondents to the
study reported being approached by strangers or acquaintances who offered
lucrative “opportunities” that turned out to be scams, fraudulent, sex
trafficking or pandering. It goes on to say that 84 percent of youth who
reported being involved in the sex trade without a trafficker did so because of
economic need.

Economics will likely play a large role in how homeless
youth are trafficked in the wake of the pandemic. As gainful employment becomes
less available and more youth and families lose their jobs and ways to sustain
themselves, the more vulnerable large swaths of populations will become.

In the Loyola study, youth said that fear of being unsheltered
or sleeping on the streets. The majority (68 percent) of youth in this particular
study who were trafficked or engaged in commercial sex in the lifetime had done
so while they were homeless, with 19 percent of all the youth surveyed reported
in engaging in commercial sex for the sole purpose of gaining shelter and food.

This number goes all the way up to 41 percent when youth reported they were, in some way, involved in the sex trade at some point in their lives while unsheltered and 1/3 of those interviewed engaged in sex for necessities as either young adults or minors.

To loop this information back to how the pandemic may affect
homeless youth, if shelters are hitting their maximum capacity under safe social
distancing guidelines and more people have no where to go to sleep except for
on the street or in “tent cities,” it is safe to conclude that more people are
vulnerable to the coercive tactics of traffickers or more people will be forced
to enter the sex trade to survive.

The same study highlights that some youth reported that as
they desperately sought out employment they were tricked by false job
opportunities that led to labor trafficking and sex trafficking.

A lack of job opportunities and lack of job skills converged
to create a perfect storm for homeless youth who are desperate and sadly resulted
in increased profits for traffickers.

One in five cisgender women and one in 10 cisgender men in
this study experienced sex trafficking. While this isn’t a startling number for
exploitation of women, as it is a common understanding that women are disproportionately
trafficked, it is important to not the high number of men who were homeless who
were also trafficked. While it is 11 percent of cisgender homeless men who
reported being trafficking, that number skyrockets to 21 percent if that
homeless man is LGBTQ.

LGBTQ youth who are homeless are disproportionately affected by sex trafficking or are engaged in the sex trade. In the Loyola study, it is important to highlight that 19 percent of the youth respondents were LGBTQ youth.

This number alone reflects that LGBTQ youth are more likely to become homeless based on a plethora of reasons – including abandonment, running away and lack of social supports – and that is a reflection of how our society has been set up to discriminate against youth in this community.

As the economic opportunities dwindle across the country because of the pandemic, the people who have already been marginalized will feel the brunt of most of the hardship.

If LGBTQ people are more likely to become homeless because of lack of social supports and lack of opportunity based on discrimination, they will likely be hit hard by the economic shrinkage. As they are not granted opportunities in times of plenty, times of scarcity will likely result in more hardship for LGBTQ people.

Across the board, as more youth become homeless, the more people become vulnerable to traffickers. This piece is designed to ring the alarm of what may be to come or what is already happening. If we are able to improve social supports for our most vulnerable populations, we are able to prevent human trafficking before it can happen.