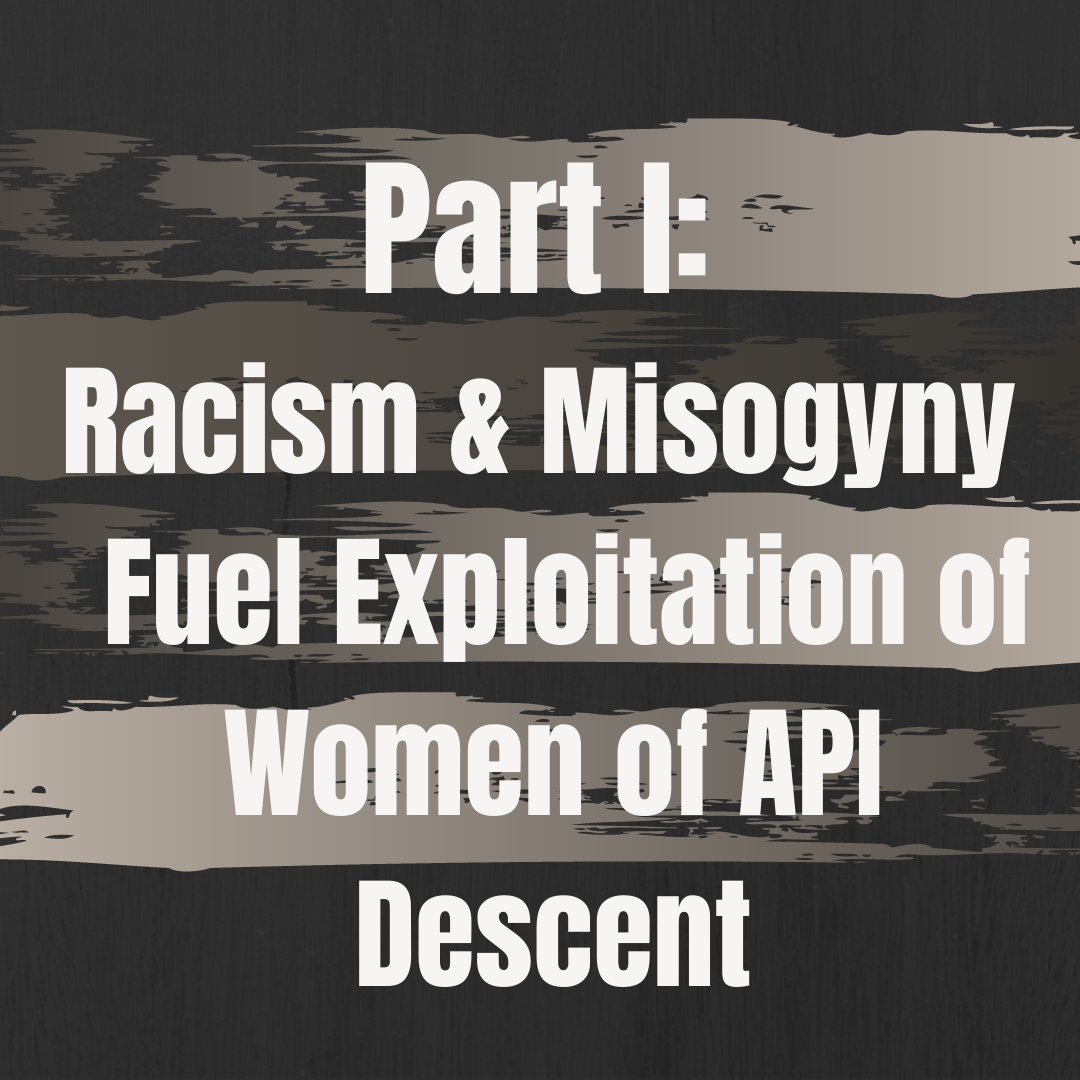 In the aftermath of the murder of seven women and one man at massage parlors and spas in Georgia, a spotlight shines on the nature of exploitation and the violence perpetrated against women of Asian/Pacific Islander descent.

To be abundantly clear, the murder of these people at Asian massage parlors/spas in two different cities is a hate crime against people of Asian/Pacific Islander descent.

By the very nature of the crime and the motive of the perpetrator, it highlights the fact it was racialized, gender-based violence.

The shooter said he murdered these women because he was a sex addict and they were the “problem.”

The motive is multi-layered and reflects what the nature of exploitation and objectification of Asian/Pacific Islander women can look like, specifically, and misogyny as a whole.

We must first ask ourselves two questions:

Why are women of Asian/Pacific Islander descent fetishized and seen as disposable to such an extent that an entire commercial sex sector (illicit massage businesses) is a leading industry in sex and labor trafficking in the U.S.?

Why was it that this white man thought it was acceptable to perpetrate the ultimate violence against these women instead of holding himself accountable to his own sexual issues?

It is important to note that there is no definitive proof that all of the victims of the shooting were involved in the commercial sex trade, which highlights the great assumption by media and law enforcement that they all were. We’re going to unpack why that assumption exists, as well as the prevalence of exploitation among women of API descent. 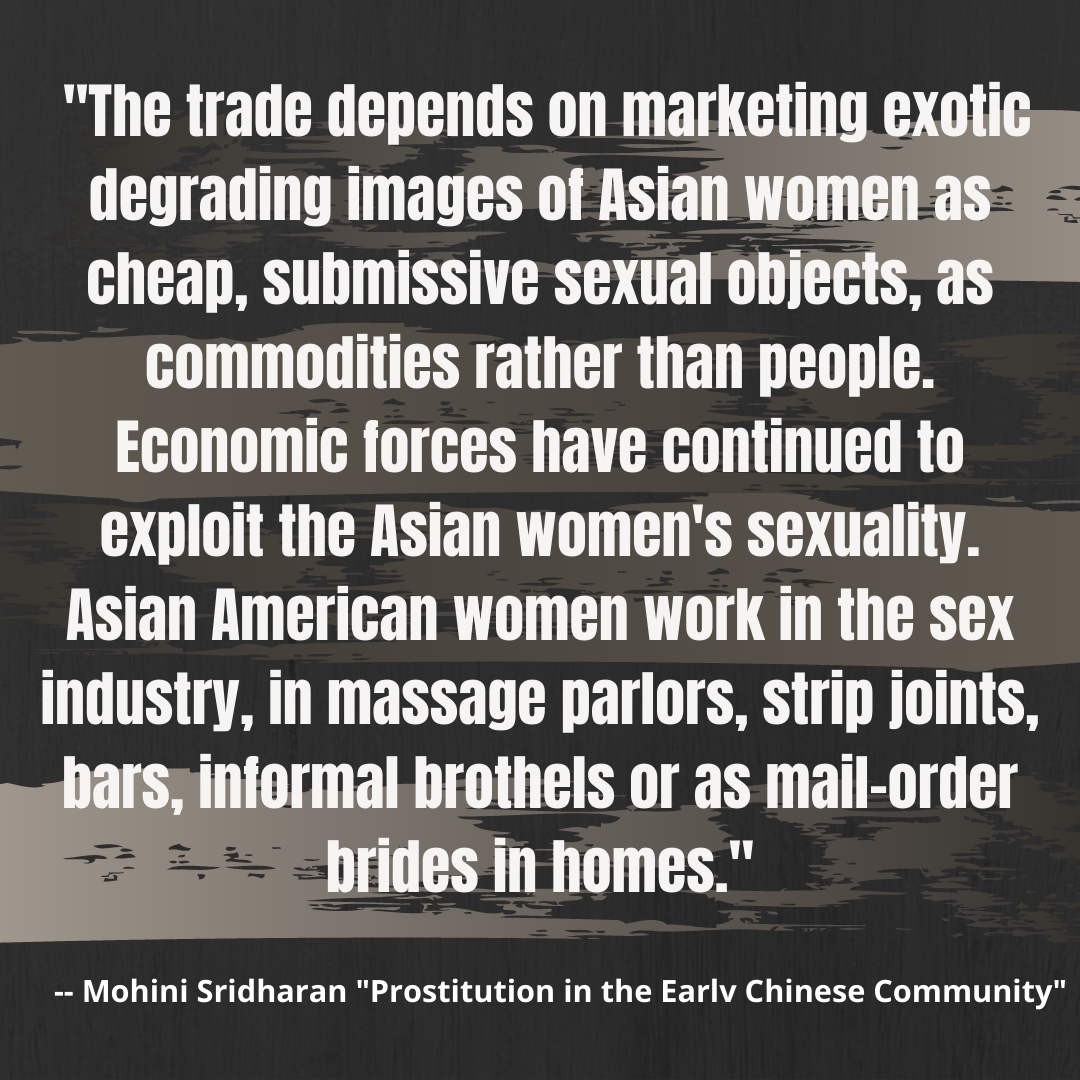 This history of exploitation of women of API descent in the U.S.

The history of Asian/Pacific Islander immigration policies in the U.S. is fraught and is a part of the beginning of the dehumanization and sexualization of API women.

In context, in 1882 the U.S. enacted the Chinese Exclusion Act prevented Chinese women from entering the U.S. for “immoral purposes,” which built on an already established false narrative in the states that most Chinese women were predominantly involved in prostitution.

“The impression, born in the mid nineteenth century, that all the Chinese women were prostitutes has colored the public perceptions of Asian women for more than a century,” Mohini Sridharan wrote in Prostitution in the Earlv Chinese Community, 1850-1900.

“I see shades of similarity between the exploitation of these Chinese prostitutes and the similar sex trade that is still rampant in the late twentieth century especially in the San Francisco’s China Town. The trade depends on marketing exotic degrading images of Asian women as cheap, submissive sexual objects, as commodities rather than people. Economic forces have continued to exploit the Asian women’s sexuality. Asian American women work in the sex industry, in massage parlors, strip joints, bars, informal brothels or as mail-order brides in homes. These women, similar to the earlier Chinese prostitutes, also face poverty, imprisonment, deportation, racist and sexist violence, rape and isolation.”

It is also important to note other racist policies that permeated the United States during WWII. In the U.S. there were Japanese Internment Camps (1942-1945), which were established by President Franklin D. Roosevelt’s Executive Order 9066, after Pearl Harbor.

These internment camps isolated people of Japanese descent and stigmatized them. These policies are still reverberating through American API communities today, and it would be misleading to not acknowledge racist policies and rhetoric and how that has, in many ways, fueled dehumanization of whole populations of people within the U.S., ultimately making violence and exploitation against them prevalent.

Read “Unseen and Unforgiving: Massage Brothels and the Sex Trafficking of Chinese Women.”

Attacks against API Americans have increased across the country due to discriminatory rhetoric that was spewed from the very top of American leadership around the origin of the novel coronavirus. Women of Asian or Pacific Island descent endured much of the brunt due to the inflammatory and misguided epithets such as “kung flu” and the “China virus.”

The shootings in Georgia were in many ways a culmination of the violence against people of API descent. 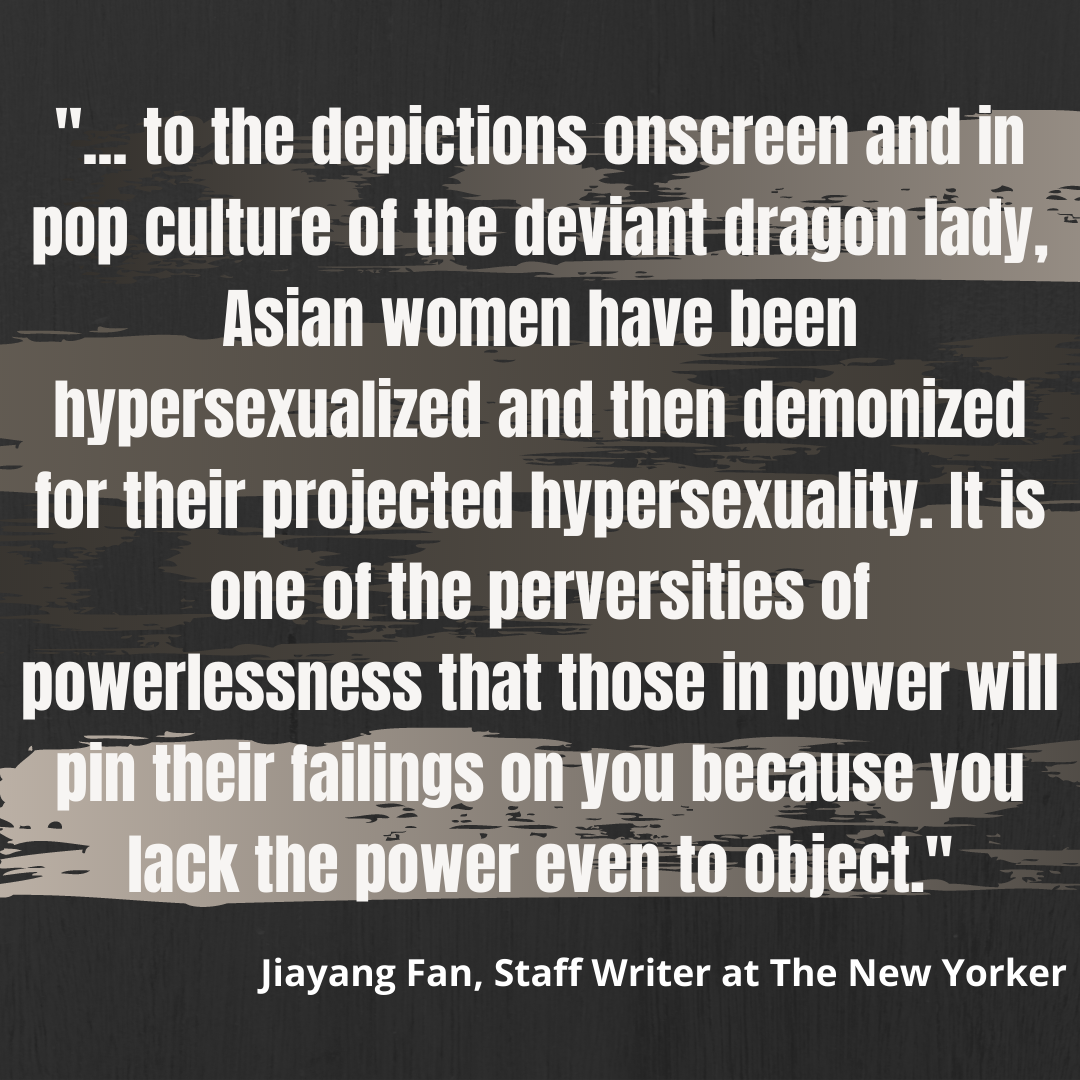 The history of exploitation of women of API descent also leads us to the history of racialized misogyny in the U.S.. Throughout history women of Asian or Pacific Islander descent were seen by men as “exotic” and “submissive,” based on the falsely propagated narrative of the media and leadership, along with differing cultural norms.

“The racism of the industry is so pervasive that it goes largely unnoticed,” according to a report by Gail Dines and Robert Jensen

“In an interview with the producer of the DVD ‘Black Bros and Asian Ho’s,’ one of us asked if he ever was criticized for the racism of such films. He said, ‘No, they are very popular.’ We repeated the question: Popular, yes, but do people ever criticize the racism? He looked incredulous; the question apparently had never entered his mind.”

Frankly, racism and exploitation of women is a tale as old as the colonization of the United States, itself. 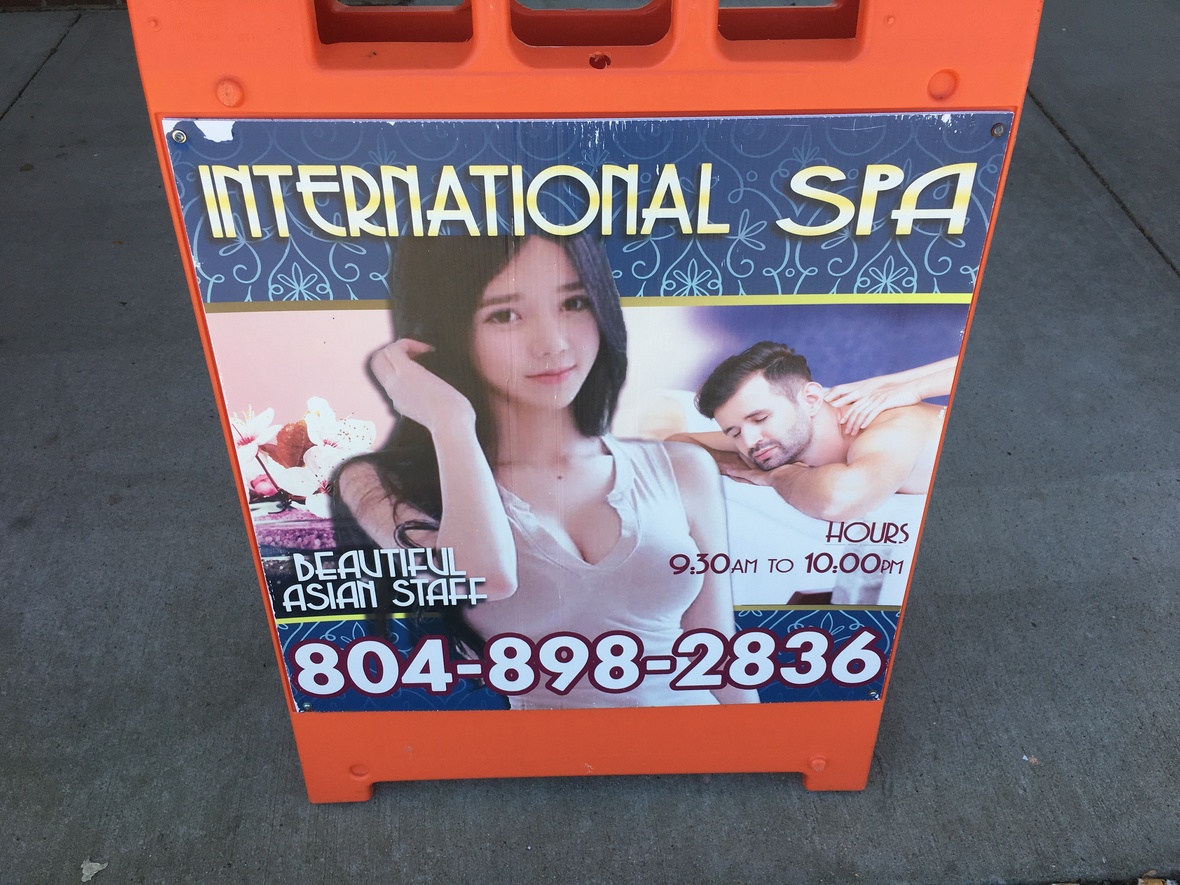 The nature of Illicit Massage Businesses in the U.S.

There are an estimated 9,000+ illicit massage businesses open in the United States that are estimated to make $2.5 billion, according to Polaris.

On a national scale, IMBs (illicit massage businesses) is an industry that comes in second behind escort services for the prevalence of sex trafficking.

This illicit business is rife with exploitation to the most extreme degree in the form of both sex and labor trafficking.

On a national level, IMBs are alarmingly prevalent, and North Carolina is not immune this industry that is always shifting and changing.

Most victims of human trafficking who are found in the IMBs are women from China and South Korea (with some from Thailand and Vietnam) between the ages of 35 to 55 years old.

We must address why illicit massage businesses have become so lucrative and sprawling, and the short answer to that is demand, based on a history of dehumanizing policies and rhetoric around Asian/Pacific Islander women in the United States.

As the demand increases, and API women become more objectified, stigmatized and ostracized, it comes as no surprise that there are 9,000+ illicit massage businesses in the United States with the majority of women in those businesses of Asian or Pacific Islander descent.

Those same women are likely being exploited for labor and sex, enduring violence and living conditions on a devastating scale and are deserving of a life they had a voice in freely choosing.

If some of these women are working in these illicit massage businesses by a free choice, they should not be arrested, and they should be treated as human beings.

The continued dehumanization of people involved in commercial sex is a human rights issue all on its own.

They are worth so much more than what the spokesperson for the Cherokee County Sheriff’s Office Capt. Jay Baker dismissed as “… [the murderer] was pretty much fed up, and kind of at [the] end of his rope, and yesterday was a really bad day for him and this is what he did,” in describing the actions of a mass shooter who took the lives of Suncha Kim; Yong A. Yue; Hyun J. Grant; Soon Chung Park; Delaina Ashley Yaun; Paul Andre Michels; Xiaojie Tan; and Daoyou Feng.